I have a secret shame and it is buying domains I won’t or don’t use. I am reforming, but it will take time. While I’m working that out let’s take a look at a hardworking tactic from late in GoDaddy’s funnel. 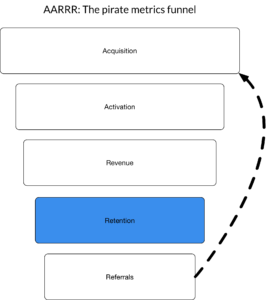 GoDaddy sent me an email about updating my personal details that is a brilliant funnel piece for established customers. I will probably look at an official account info email where I might not look at renewing domain notices for domains I turned off autorenew.

This one insight — administrative subject lines create action — powers an email that has more than one goal and really succeeds with it. 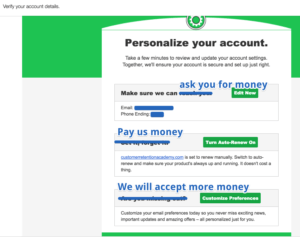 Much like your “confirm your email” emails can do other tasks as well this is a great example of a routine account info email improving the funnel they’re optimizing. This email makes sure they have my contact info, offers me product I might want, and offers me more product and service marketing. On top of that, the official nature of the subject means I’m really likely to click on it.

I don’t know the conversion rate for this email but I can’t object to receiving something similar once in a while. It’s even good for account security. Improving your standard transactional emails to do extra work for the funnel is an awesome way to get incremental improvement from your funnel.

This is nice work from GoDaddy. 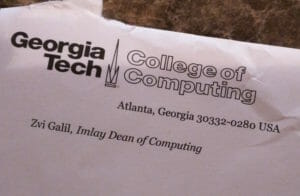 I recently received a letter from my alma mater asking for money. They made 3 key mistakes in constructing this donation funnel. I’m going to explain how you can avoid these issues to reduce funnel friction and improve conversion.

I think fondly of my alma mater and I’m predisposed to donate. This is somewhat common for Georgia Tech grads who (last I looked) were the highest per capita donors. The school must do a good job of one of at least one of the following: 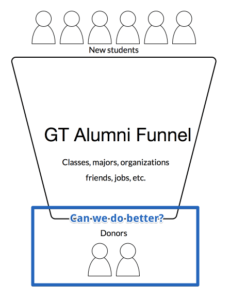 We’re here to analyze this fundraising letter as a funnel and see how they are faring at the first task, but identifying alternative explanations for why a funnel might work for customers can be an important insight!

To the letter. Feel free to read through it (page 1, page 2), but I’ll also highlight the key portions.

There are a lot of facts here, but there isn’t much context in which to place them. I don’t know if all of the facts, awards, and numbers they present are good or bad in relative terms.

The ranking is nice though I’m not familiar with the source. The facts without a story or context are our first key mistake.

Key Mistake 1: Facts without a narrative

This really isn’t much of a vision and I have no idea from this letter what the goal of the fundraising is, that they are definitely seeking funds, nor what an appropriate donation would be for me.

The $2 billion dollar campaign that I heard about from the Institute was much more explicit about the vision for the money, the amount they needed, and had some context around what each alum would need to give to make the program work. This met with success and they were able to follow up with a glossy magazine/brochure that detailed all that they could do with the $2.6 billion they received.

I don’t know the Dean and I don’t have any clue what his vision of ‘the next level’ happens to be. I wish I did.

This is the second key mistake. Any campaign, email, page, donation request, or product should be clear about the purpose and benefit for the customer/prospect. I don’t know what I get out of this campaign nor for what purpose the money will be used?

So, what are we doing with the money? What’s the story and emotion behind why I’m giving?

How much is appropriate for me to donate? I don’t know what an appropriate donation is. While you may receive less when you suggest less, you will often receive nothing if you make people stop and think. 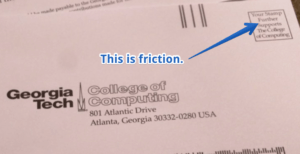 I understand that the stamp costs money, but I think it would have been worth spending. Especially so if you included an easy way to donate specific amounts.

Physical friction sometimes costs you twice as much in a digital world.

There was a good opportunity for the College to use a marketing tactic where you have already recruited key donors and peers to show progress (usually 50% is the initial goal), add peer pressure, and add social proof to the campaign. Then you can use a powerful bit of psychology where you tell me what my average peer has donated and invite me to join my peers in powering this campaign to the next level.

I think this funnel probably serves them well enough. I know they have a lot of happy and willing donors that owe a lot to the education they received, but I also know that we have highlighted some missed opportunities that might have raised the bar for this campaign. I bet they left 25% on the table.

How can Ramit Sethi (I Will Teach You To Be Rich) make millions with a single email?

Let’s start by checking out the funnel at a high level.

This is a simplified view of the funnel, but it’s meant to convey the entry points and strategy used to move leads to paid conversion. The primary site currently has a quiz interface that asks a range of questions, requests an email address, and places you on the list in a campaign for an introductory (free) course that delivers some value and tees the prospect up for interest in more (paid course).

There’s a lot going on here and we’re going to focus on a single email in the introductory course campaigns. The level of attention to detail in this email is a testament to how well tested, considered, and constructed this whole funnel is (I don’t have any commercial relationship with Ramit or IWT). 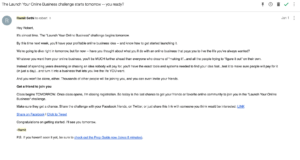 Here’s an email reminder from Ramit Sethi. This is a warm-up in a sequence that goes out before you are let into the (free) course that you signed up to take. You sign up either post-quiz from the IWT home page or directly on the intro course site.

The warm-up is smart because it allows for some of the other tactics to take place and primes you with anticipation. Often anticipation is a greater force than the object or experience we anticipate, but we know that anticipation can still greatly improve the experience and make it seem more exclusive, interesting, and of higher quality.

In addition to that, we know that delivering some value and building trust with these initial emails and an introductory course will greatly improve the quality of the email list beyond a certain stage. Most importantly, this improves conversion and the number of chances you get to convert the prospect.

On to the meat. Let’s take a look at the email itself.

Time for a blow by blow on the tactics in this super targeted, tight piece of work.

He asks the reader to imagine what they will do with the object (a business) that they desire (pays for the life you want). He’s asking you to imagine the future you could have at the end of the course once you achieve the thing the course is promising. This builds anticipation and excitement. It also improves the psychology of getting the people to take action. Imagining your future place can create some of the effects of loss aversion to motivate you. Loss aversion is the psychological effect where humans feel losing something at twice the magnitude of gaining the same thing. Here, you don’t want to lose your vision.

“Thousands of other people” will be joining you. Humans crave shared experience and here he’s offering you that, but he’s also using it to give you a reason to invite your friends. Friends that he can add to this funnel and he knows you likely have such interested friends because you’re here and interested. He has tied together a play for referrals with a reference that is an element of social proof.

“Class starts TOMORROW” is a classic scarcity play. You often need the reader to take action NOW or they probably won’t do so at all. This call out functions well to create some feelings of urgency (scarcity of time) in the reader and get a much better conversion rate on sharing actions.

If you want your reader or lead to take action, make it as easy and frictionless as possible for them to take that action. We can share three different ways here with a click and Ramit can track which ones people are using most.

Sometimes people get so fired up they want to engage with your product or service right away. You don’t always want to offer a quicker way to purchase, but you can often offer another way to engage like more content, sharing, a community, etc.

These are great touches in a warm-up sequence. They are on top of their game over at IWTYTBR. Except maybe that acronym?